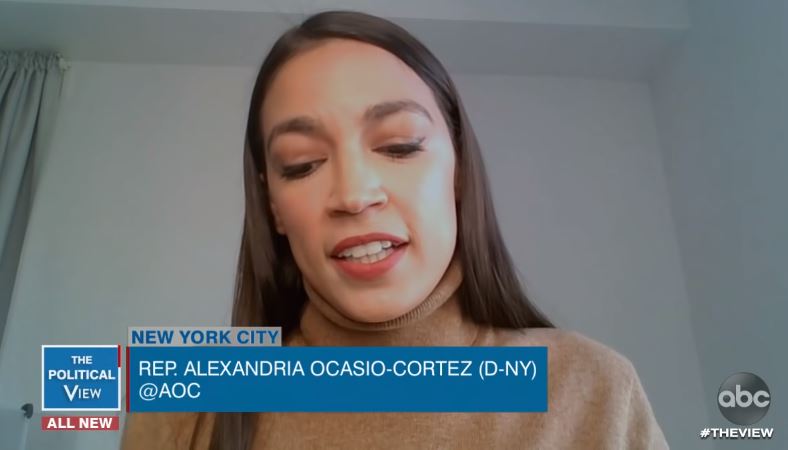 Tuesday’s New York Times used the coronavirus pandemic to push both the leftist fight against “inequality” and left-wing politician Rep. Alexandria Ocasio-Cortez. She was fawned over in the lead National story slot, a full-page profile: “Lonely Voice in Congress Amplifies Plight of a Stricken District.”

Today, the youngest woman ever elected to Congress — known simply as A.O.C. — owns another distinction, this one far grimmer: She represents the nation’s most devastated hot zone of the coronavirus outbreak.

She wore no mask, either to protect her face from germs during this interview (conducted at a 12-foot distance) or to cover up her emotions generally. The wreckage in her community has made a darkly eloquent case, she said, for her agenda of universal health care and less income inequity….

Remember when it was a scandal for a politician to go around without a mask?

….Ms. Ocasio-Cortez had just returned from Washington after a vote last month on the latest relief bill in Congress. She was the only Democrat to vote against the $484 billion package that passed overwhelmingly…..

Apparently Ocasio-Cortez was right and it was everyone else in Congress that was wrong:

Ms. Ocasio-Cortez’s colleagues are, for the most part, farther removed from the virus’s daily toll, which has only heightened the alienation she felt when she arrived on Capitol Hill last year. “I have, like, existential crises over it,” she said.

At the root of this has been the hardship the pathogen has imposed on where she lives, something that can be difficult to appreciate from the sanctuary of the Capitol….

Ocasio-Cortez’s colleagues who voted for the measure are ignorant of the pandemic, and get their distorted opinion of her from Fox News  (click “expand”):

It is not the same for many members of Congress, a world far from the shuttered taquerias, overrun emergency rooms and refrigerator trucks doubling as makeshift morgues that sit within a few miles of Ms. Ocasio-Cortez’s home in the Bronx. The disconnected reality contributes to her sense of feeling misunderstood by her colleagues, something she felt well before the virus ravaged her district.

“I felt like my colleagues were making opinions about me based on Fox News,” she said….

She believed misconceptions had taken hold about her: that she was angry and strident. That she was naïve….

If the shoe fits….

Also on Tuesday, from the “don’t let a crisis go to waste” department, Tim Arango and Thomas Fuller rooted on the state’s left-wing ideologues: “In Crisis, Liberals See a Shot At Change”:

Propelled by the urgency of the coronavirus crisis, and despite severe economic headwinds, liberal Californians see this moment as an opening to push through an agenda that addresses some of the state’s most intractable and long-debated problems….temporary measures to confront the pandemic that leaders are hoping will become durable solutions to longstanding problems of inequity.