Reuters is pushing an insane idea that eco-extremist activist Greta Thunberg could get the Nobel Peace Prize.

In a story headlined, “A Nobel for Thunberg? In the age of climate change and virus, it is possible,” Reuters’ Gwladys Fouche spouted off that “[t]his year’s Nobel Peace Prize could go to green campaigner Greta Thunberg and the Fridays for Future movement to highlight the link between environmental damage and the threat to peace and security, some experts say.”

This reads very different from when the same writer took the news that President Donald Trump had been nominated for next year’s Nobel Peace Prize for brokering a peace deal between Israel and the United Arab Emirates and downplayed the achievement:

Trump has been unable to negotiate a deal between Israel and the Palestinians, however, and a peace plan he proposed in January that heavily favoured the Israelis has not advanced in any significant way.

Asle Sveen, a historian and author of several books about the prize, said Thunberg would be a strong candidate for this year’s award, her second nomination in as many years, with the U.S. West Coast wildfires and rising temperatures in the Arctic ‘leaving people in no doubt’ about global warming. ‘Not a single person has done more to get the world to focus on climate change than her,’ Sveen told Reuters, [emphasis added.]

The bias was especially evident in a subsection that was headlined in capital letters and bold font: “NOT TRUMP.” The subsection listed other potential Nobel recipients for 2020. Reuters griped: “[Trump] is unlikely to win, Sveen and Smith agreed, not least for his dismantling of the international treaties to limit the proliferation of nuclear weapons, a cause dear to Nobel committees.” [Emphasis added.]  Fouche didn’t bother to mention that one of those “treaties” Trump pulled out of, the 1987 Intermediate-Range Nuclear Forces Treaty, reportedly had been repeatedly violated by Russia. 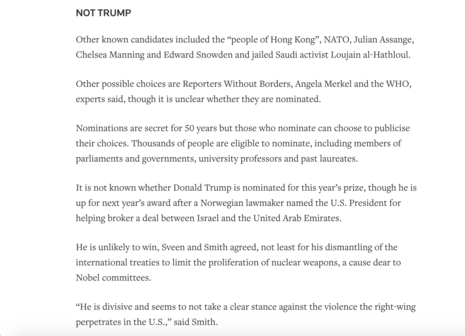 According to Bloomberg Opinion’s national security and foreign policy Opinion Columnist Eli Lake: “The Russians, in contrast, have been cheating for more than a decade. In 2008, they began testing a ground-based cruise missile system. In 2017, the U.S. government acknowledged that Russia had deployed what is known as the ‘9M729 missile’ against NATO positions in Europe.”

But instead of providing context behind why Trump pulled out of certain treaties, Fouche just mindlessly parroted the insults of Stockholm International Peace Research Institute director Dan Smith: “‘[Trump] is divisive and seems to not take a clear stance against the violence the right-wing perpetrates in the U.S.,’ said Smith.”

But elevating a teen extremist like Thunberg has been typical of the liberal media. In May, CNN had ridiculously included Thunberg on an expert panel in a town hall to discuss the novel Coronavirus.