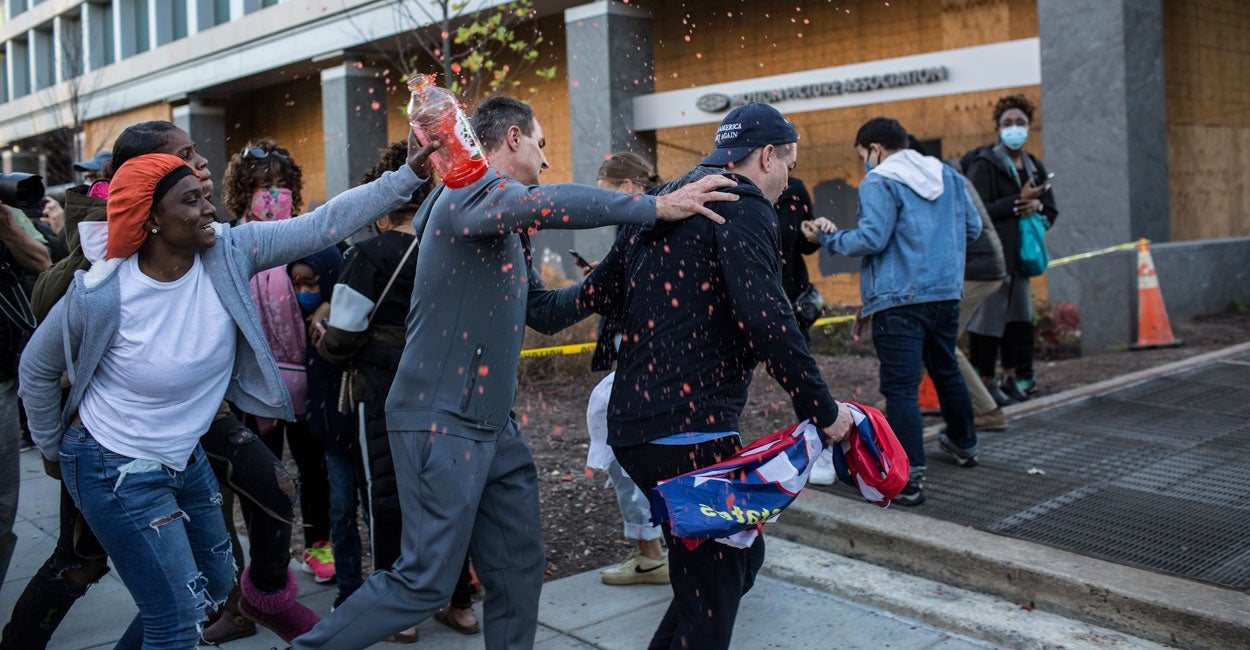 Republicans on the House Oversight and Reform Committee wrote a letter to Chairwoman Carolyn Maloney, D-N.Y., to launch an investigation into attacks that took place on supporters of President Donald Trump in the nation’s capital on Saturday.

“We respectfully request a hearing on the violence directed at supporters of President Trump on Nov. 14, 2020,” the House Republicans wrote to Maloney. “These supporters were exercising their First Amendment right to peacefully assemble within the District of Columbia.”

They also demanded that District of Columbia Mayor Muriel Bowser answer for what took place: “The failure of the city’s leaders to afford basic protections to persons who may hold different political viewpoints from their own appears to be another concerning example of viewpoint discrimination in the District.”

In case you missed it, over the weekend tens of thousands of protesters marched in the District of Columbia to voice their support of the president and opposition to voter fraud.

The “Million MAGA March,” held Saturday afternoon, was a peaceful event. But as the sun went down and the pro-Trump demonstrators left the protest, violent agitators and counterprotesters emerged and descended upon them to harass and, in many cases, to commit violence.

Police arrested 21 people in connection to the violence, according to NBC Washington.

NBC Washington described some of the various charges of the suspects in this maelstrom, which included disorderly conduct and assault.

Though many local outlets covered these incidents extensively, the story gathered little attention from national media. One would think that widespread violent attacks on peaceful protesters expressing their First Amendment rights would elicit a strong response from journalists.

But coverage was both lukewarm and deceptive, portraying the incident as if it was Trump supporters who were the originators of the violent behavior.

The headline of this article wasn’t the only deceptive part of The Washington Post’s coverage, as Kylee Zempel explained at The Federalist:

The Washington Post writers were careful to mask the identities of the violent demonstrators in vague language and passive voice. For instance, ‘a man in his 20s was stabbed in the back.’ They describe an ‘argument that exploded’ in the middle of the night between a man holding a Trump flag and a group of agitators. ‘Suddenly,’ the Post says, ‘police tackled two people in a crosswalk,’ whom they failed to identify. Rather than attributing actions to the counterprotesters, the Post went for, ‘the appearance of counterprotesters sparked bursts of conflict,’ implying strife materialized out of thin air when leftists were simply present.

Some of those who participated in the violence appeared to be affiliated with the Proud Boys, a right-wing group, but almost all the attacks were committed on the Trump supporters.

The previous week, The Washington Post ran an article claiming that Republicans were becoming more “authoritarian” and using more violent rhetoric in recent years, citing a study by a team of anonymous international political scientists.

And what happened when wanton destruction hit cities, large and small, around the country?

A movement that includes between 15 and 26 million, according to The New York Times, with a nearly 10% rate of violence has a problem.

It goes without saying that it is this sort of slanted coverage that undermines faith in the press.

The post Chaos and Anarchy in DC appeared first on The Daily Signal.

Fearing 2024 Run, MSNBC Pleads: Just ‘Ignore’ Trump!
Farewell to Economist and Teacher Walter E. Williams, My Best Friend
Here’s How COVID-19 Restrictions Curb Religious Freedom
Defund the Police Movement: If You Like Your Cops, You Can Keep Them
The Cost of Locking Down the Entertainment Industry