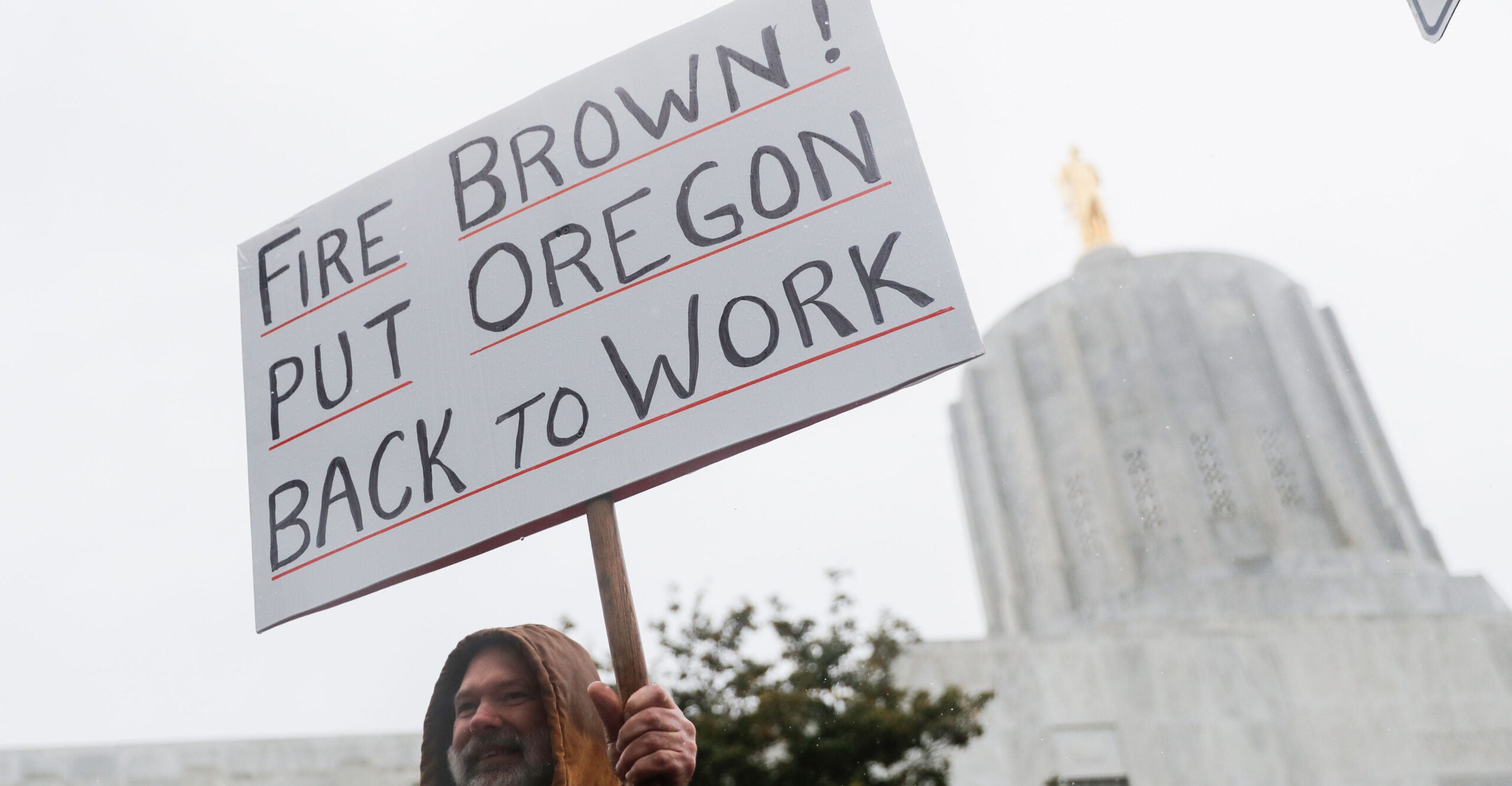 America is officially eight months into what was said to be 15 days to slow the spread of COVID-19, and several states are now set to embark on a second round of extensive shutdowns.

Standing out from the rest, the trio of Left Coast governors are apparently competing for the dubious distinction of “America’s Top Tyrant”—and Oregon’s Kate Brown might have just upped the ante.

>>> What’s the best way for America to reopen and return to business? The National Coronavirus Recovery Commission, a project of The Heritage Foundation, assembled America’s top thinkers to figure that out. So far, it has made more than 260 recommendations.  Learn more here.

Brown’s newest “two-week freeze,” decreed Nov. 13, ushered in some of the most totalitarian restrictions in the country. In addition to limiting social behavior in public places, Brown has now claimed the authority to mandate what Oregonians can do in the privacy of their own homes, as well.

Most notably, the Democrat’s freeze includes “limiting social get-togethers (indoors and outdoors) to no more than six people, total, from no more than two households.”

While other governors have issued edicts encouraging residents to comply, Brown stands out as the first to actually make her orders mandatory—and to threaten violators with jail time.

“For the last eight months, I have been asking Oregonians to follow the letter and the spirit of the law, and we have not chosen to engage law enforcement,” Brown said in her press conference, fittingly held on Friday the 13th. “At this point in time, unfortunately, we have no other option.”

Yes, we really have arrived at the point where you quite literally could go to jail for having dinner with your extended family inside your own home.

The night before Brown’s jail warning, U.S. Supreme Court Justice Samuel Alito sounded the alarm about precisely these types of mandates when he delivered a virtual address to the Federalist Society, saying, “The pandemic has resulted in previously unimaginable restrictions on individual liberty.”

He went on to say it is an “indisputable statement of fact” that “we have never seen restrictions as severe, extensive, and prolonged as those experienced for most of 2020.”

So, how did we get here? The simple answer: We asked for it.

A democratically elected governor would only assume the role of tyrant if he or she knew he or she could get away with it. And by being so lackadaisical during the first round of shutdowns, we the people all but invited her now dictatorlike behavior to become our reality.

We’ve arrived at a point where we must seriously consider the notion that Brown might not actually have the best interests of you and your family in mind, and that we certainly aren’t “all in this together.”

“We hold these truths to be self-evident, that all men are created equal, that they are endowed by their Creator with certain unalienable Rights, that among these are life, liberty, and the pursuit of happiness. That to secure these rights, Governments are instituted among men, deriving their just powers from the consent of the governed,” the Declaration of Independence tells us.

Our individual rights and liberties are not privileges. Nor are they “fair-weather freedoms,” as Judge William Stickman IV beautifully wrote earlier this fall in his rebuke of Pennsylvania Gov. Tom Wolf’s lockdown orders. They are guaranteed.

It’s long past time for Oregonians—and all other Americans across the country—to reflect on what “from the consent of the governed” means.

We did not consent to allow career politicians and unelected bureaucrats—who haven’t had to worry about missing a paycheck—to determine whose businesses and jobs are essential and who will be prevented from going to work.

We did not consent to the government closing our houses of worship and forbidding music and singing.

We did not consent to allowing Brown and other wannabe dictators to tell us how many people we can welcome to our tables.

We can expect these brazenly unconstitutional power grabs to continue until we push back.

Ask yourself whether a governor who releases thousands of inmates due to COVID-19 concerns, yet is simultaneously willing to jail an untold number of innocent Oregonians for celebrating the holidays with their families, is really primarily concerned with public health.

Depending on how you answer that question, I’d encourage you to enjoy your Thanksgiving and holiday season accordingly. I know I will.