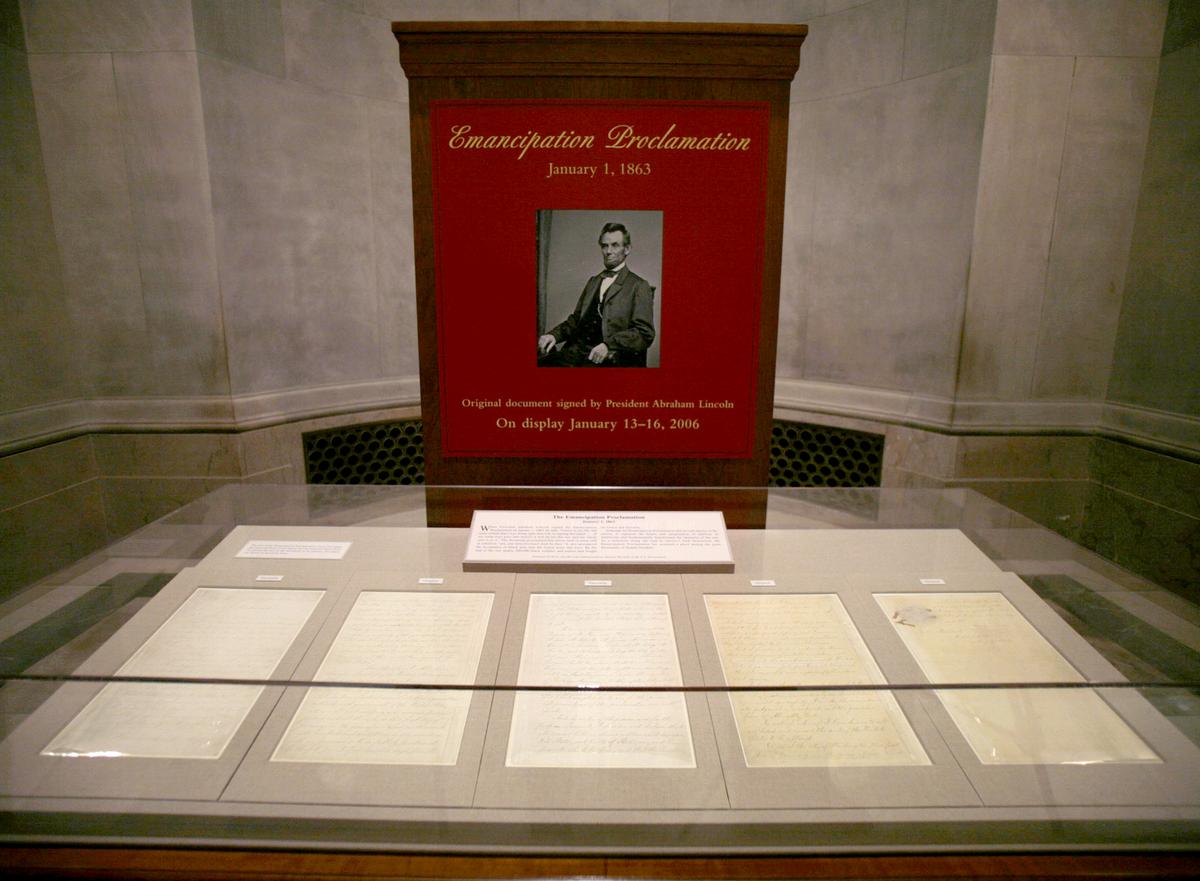 FILE PHOTO: The Emancipation Proclamation is displayed at the National Archives building in Washington, January 13, 2006. President Abraham Lincoln issued the Emancipation Proclamation on January 1, 1863, during the American Civil War, formally proclaiming the freedom of all slaves held in areas still in revolt. This original document is displayed for public during four days once a year. REUTERS/Yuri Gripas/File Photo

(Reuters) – Juneteenth, an annual U.S. holiday on June 19, has taken on greater significance this year following nationwide protests over police brutality and the deaths of George Floyd, Breonna Taylor, Rayshard Brooks and other African Americans.

Juneteenth, a portmanteau of June and 19th, also is known as Emancipation Day. It commemorates the day in 1865, after the Confederate states surrendered to end the Civil War, when a Union general arrived in Texas to inform the last group of enslaved African Americans of their freedom under President Abraham Lincoln’s 1863 Emancipation Proclamation. In 1980, Texas officially declared it a holiday. It is now recognized in 46 other states and the District of Columbia. Although in part a celebration, the day is also observed solemnly to honor those who suffered during slavery in the United States with the arrival of the first enslaved Africans over 400 years ago.

WHAT IS SIGNIFICANT THIS YEAR?

This year Juneteenth coincides with global protests against racial injustice sparked by the May 25 death of Floyd, a black man, in Minneapolis police custody. It also accompanies the coronavirus outbreak, which has disproportionately affected communities of color. Last week, U.S. President Donald Trump, who had already been under fire for his response to both crises, drew further criticism for scheduling a Friday re-election rally in Tulsa, Oklahoma. He has since moved it to Saturday. Tulsa is an important and especially sensitive site where a white mob massacred African-American residents in 1921. Community organizations nationwide will devote the day to discussions on policing and civil rights ahead of the November election.

HOW ARE PEOPLE MARKING THE DAY?

People will mark the 155th anniversary across the country with festive meals and gatherings. While many cities have canceled this year’s annual parades because of the pandemic, other groups have opted for virtual conferences or smaller events. In Washington, groups plan marches, protests and rallies. Amid the wave of racial justice protests, some U.S. businesses have committed to a change of policies, including recognition of the holiday. Among the companies that have announced they will recognize Juneteenth as a paid company holiday are the National Football League (here), the New York Times, and Twitter and Square.

Missouri Democratic lawmaker censured for harassing a former aide and lying under oath
ABC Cop Show ‘The Rookie’ Laments Thief’s Arrest: He Got ‘Short End of Stick’ in ‘Rigged System’
NewsBusters Podcast: PBS Exposes and Tech Censors with Tim Graham & Corinne Weaver
Exclusive Interview: Ben Carson on How to Help Homeless in Your Community
So it sort of looks like the MyPillow guy might be trying to get Trump to stage one last coup attempt