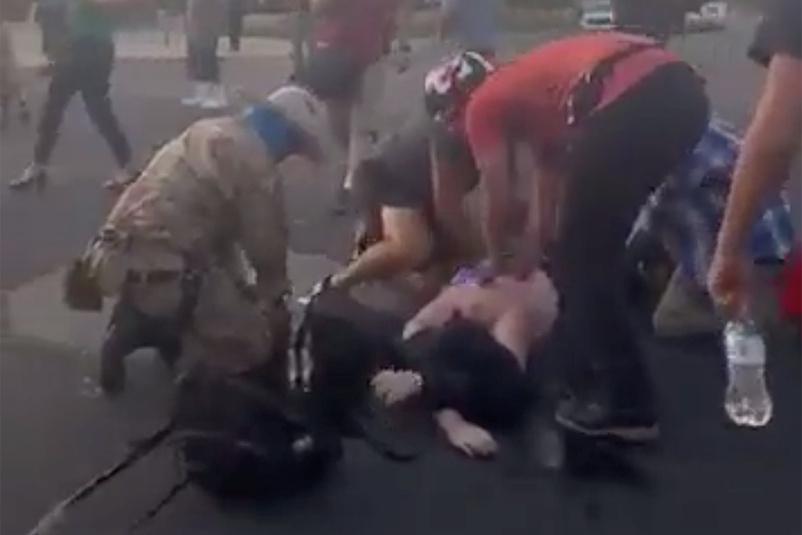 (Reuters) – A man was shot and wounded on Monday during a protest near a museum in downtown Albuquerque, New Mexico, police said, where demonstrators were reported to be trying to tear down a sculpture of a 16th-century Spanish conquistador.

Attendees help a man who was shot and wounded during clashes between protesters trying to pull down a statue of Juan de Onate and armed members of civilian militia group New Mexico Civil Guard in downtown Albuquerque, New Mexico, U.S. June 15, 2020, in this still image obtained from a social media video. Courtesy of Fight For Our Lives/Social Media via REUTERS.

“The victim is reported to be in critical but stable condition,” the Albuquerque Police Department (APD) said in a tweet, adding that the incident had ended.

The Albuquerque Journal newspaper reported that the shooting erupted during a clash between protesters trying to pull down a statue of Juan de Onate and several heavily armed members of a civilian militia group called the New Mexico Civil Guard.

Police chief of Albuquerque, Michael Geier, said in a statement that police were receiving reports about vigilante groups possibly instigating the violence.

The confrontation occurred outside the Albuquerque Museum in the heart of the city’s Old Town district.

According to the Journal’s account, one man involved in a physical altercation with the protesters appeared to draw a gun and fire five shots after he was pushed onto the street, sending members of the crowd scurrying for cover as one person yelled, “Somebody got shot.”

The Federal Bureau of Investigation (FBI) is currently assisting APD violent crime investigators as they interview individuals who were involved in the shooting, the tweet said.

“Police used chemical irritants and flash bangs to protect officers and detain individuals involved in the shooting. The individuals were disarmed and taken into custody for questioning.”

Video footage posted to social media from the scene appeared to show one man lying on the ground as several other people tried to render assistance. A separate clip showed three men lying face down and spread eagle on the pavement as police in riot gear stood over them, apparently making arrests. Another officer appeared to be on the ground as well.

Anti-racism protesters venting anger over last month’s death of George Floyd, a black man who died in police custody in Minneapolis, have taken to destroying statutes honoring the U.S. Civil War’s Confederacy, as well as sculptures of imperialists, conquistadors and other historical figures associated with subjugation of indigenous populations around the world.

The statue at the center of Monday’s protest in Albuquerque is part of a controversial sculpture called “La Jornada,” which depicts Onate, known for the 1599 massacre of a pueblo tribe, leading a group of Spanish settlers into what is now New Mexico.