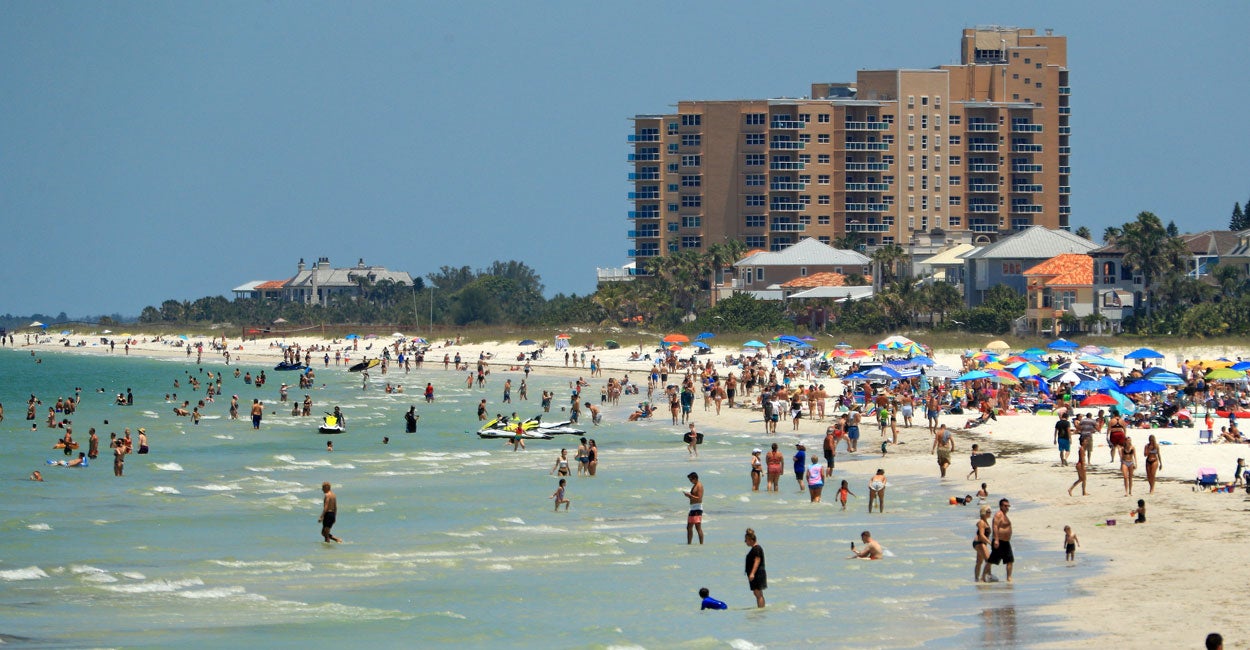 Activists and policymakers
on the left are trying again to grab Americans’ tax dollars to bail out state
and local governments from their own poor budget choices, this time using the COVID-19
pandemic as an excuse.

Congress provided tens of billions of dollars in coronavirus relief to states as part of the CARES Act, of course. But those who view the federal government as a money machine for their causes appear determined to secure unfettered funds for state and local officials to spend.

Last month, liberal lawmakers were unsuccessful in their attempt to include those bailouts in congressional legislation creating the Paycheck Protection Program, designed to provide coronavirus relief to owners of small businesses and their employees.

>>> When can America reopen? The National Coronavirus Recovery Commission, a project of The Heritage Foundation, is gathering America’s top thinkers together to figure that out. Learn more here.

“Not only would such a bailout set the stage for future mismanagement,” Heritage Foundation President Kay C. James argued at the time, “it is not the federal government’s role to use taxpayer dollars to finance states’ ordinary operations or encourage longer shutdown measures than necessary.”

The Daily Signal, Heritage’s multimedia news organization, asked state-based, free-market think tanks to weigh in on what’s happening in their states and the need to resist the allure of bumming billions more from Uncle Sam, as if hard-pressed taxpayers wouldn’t get stuck with the bill.

First, some background and context. Policy analysts at Heritage and other conservative organizations argue that policymakers should resist calls for U.S. taxpayers to bail out state and local governments.

Heritage’s own National Coronavirus Recovery Commission has recommended that Congress provide targeted and temporary economic relief for taxpayers, families, and businesses of all sizes.

Rachel Greszler and Adam Michel, two of the leading conservative think tank’s experts on related issues, make the case against using federal taxpayer dollars to cover states’ self-imposed fiscal woes, arguing that it would result in more such recklessness.

“COVID-19 is a public health crisis, not a pretext for states
to request funding for things that are their own responsibility,” Greszler writes.

Michel criticizes the National Governors Association’s recent
request for Congress to fork over $500 billion with no restrictions on using
that money.

“Congress is making the same mistakes with some of the promised federal aid as lawmakers made with past federal bailouts,” Michel writes, adding:

Doubling down on this flawed strategy by sending more money, especially unrestricted money, to state governments would grow states’ budgets, increase future funding shortfalls, further undermine local decision-making, and set a dangerous precedent that could lead to further federal bailouts of the most irresponsible states. Instead, Congress should provide more flexibility to states by lifting unfunded mandates.

State-based public policy organizations—or think tanks—are making similar arguments to their states’ elected officials and other policymakers as they move to revive their coronavirus-battered economies.

Here’s how some of them responded to The Daily Signal’s invitation to assess what’s happening on their ground.

Under Gov. Ron DeSantis, a Republican, Florida addressed several challenges to the health care system that ensured we were not only better prepared for COVID-19, but future health stresses.

These steps included expanding telehealth; eliminating “certificate of need” laws governing establishment or expansion of health care facilities; allowing highly qualified nurses to practice at the top of their training; and allowing pharmacists to test and treat for flu, strep, and other routine conditions.

In
addition, Florida passed comprehensive occupational licensing reform to better
position the state for economic recovery and more quickly get Floridians back
to work.

Our
reserves are hefty, but there will be a limit to the pain. Sen. Rick Scott,
R-Fla., is on board and probably all our state-level leadership in that money
from any COVID-related relief legislation should not be used to fix problems
that existed before the pandemic (i.e., pensions or awful budgeting practices).

However, if there is a package in Congress that deals solely with relief of revenues lost from mandated government shutdowns that affected the state budget, that will be a tough one for elected leaders to say “no” to based solely on principle.—Bob McClure, president and CEO, The James Madison Institute

Louisiana is no
stranger to disasters. After Hurricane Katrina, a large influx of federal funds
caused state spending to skyrocket, but unfortunately, Louisiana didn’t work to
reprioritize state spending. As in other states, we don’t foresee a situation
where federal dollars would be rejected in Louisiana.

Now, as new federal dollars start to pour in, Louisiana is considering passing much-needed limits on state expenditures to ensure it prioritizes funding. This will prevent the new federal influx from permanently increasing state spending and ensure that Louisiana lives within its means.—Daniel Erspamer, CEO, Pelican Institute for Public Policy

Mainers are getting restless. Recently, hundreds packed the streets of Augusta to protest the decision by Gov. Janet Mills, a Democrat, to continue a state of emergency and advance an arbitrary, phased-in reopening plan.

Maine Policy Institute has gathered more than 6,000 signatures supporting an alternative plan, emphasizing flexibility for businesses and trust in people. Republicans, in the minority, are urging legislative leadership to call a special session to end the state of emergency. But since Maine would lose federal relief funds, this is unlikely, as Senate President Troy Jackson, D-Allagash, has indicated.

Our executive branch and leadership in both chambers of the state Legislature seem to be keen on the possibility of accepting federal funds for COVID-19 relief.—Nick Murray, policy analyst, Maine Policy Institute

As Maryland grapples with the immediate public health crisis, the Maryland Public Policy Institute is shining a light on the looming fiscal and economic crises that will remain after COVID-19 subsides.

Gov. Larry Hogan, a Republican, wrote a letter to President Trump in his capacity as National Governors Association chairman asking for $500 billion in federal aid to states to help with budget shortfalls related to COVID-19. So he is definitely asking for aid for the states.

Our chief economist, Stephen J.K. Walters, is urging Maryland to halt plans for $32 billion in new public education spending. The so-called Kirwan plan could be paid for only with massive tax hikes, which, as I have written, will cripple taxpaying families and small businesses at a time they can least afford it.—Carol Park, senior policy analyst, Maryland Public Policy Institute

Michigan Gov. Gretchen Whitmer and legislative leadership agreed
to cuts in a recent spending bill to address COVID-19. This included axing a
corporate subsidy program for the tourism industry to $0. Whitmer also has relaxed
onerous “certificate of need” rules and expanded scope of practice
opportunities for some medical personnel.

State Sen. Jim Stamas has called for government layoffs and Majority Leader Mike Shirkey has ordered Senate subcommittee chairmen to propose cuts of between 10% and 30% of the budgets they oversee. Both senators are Republicans.

Whitmer has publicly opposed the path to bankruptcy that U.S. Senate Majority Leader Mitch McConnell, R-Ky., floated April 22. The Legislature seems to be preparing to bail itself out with real cuts.

On the previous billions sent to Michigan strictly for pandemic-related expenses, we have seen interest in some flexibility in how the money can be used.—Michael LaFaive, senior director of fiscal policy, Mackinac Center for Public Policy

North Dakota’s revenues were running 7.6% higher than forecast
early in 2020 and State’s Budget Stabilization fund holds is at $700 million,
roughly 25% of the budgeted expenditures for the remainder of the biennium.

Gov. Douglas Burgum, a Republican, can access the “rainy day fund” by making a 3% allotment across
the board to the state budget, with further funds available after additional
spending cuts of 1% and 2%. No budget cuts have been made to date, but the
governor requested state agencies to reduce their budgets 5% to 15% for the
next biennium.

North Dakota used funds from the CARES Act to shore up the unemployment trust fund. The governor and our state Legislature aren’t interested in more government bailouts and have no interest in bailing out poorly run states across the nation that do not show fiscal responsibility in good times.—Bette Grande, CEO and president, Roughrider Policy Center

As recommended by The Buckeye Institute in its Policy Solutions for the Pandemic series, Ohio plans to strategically use its rainy day fund to help balance the state’s budget.

Ohio also is taking other prudent Buckeye-recommended steps such as freezing state hiring and cutting nonessential state spending by at least 20% and redirecting spending to cover costs related to COVID-19.

The crisis caused by COVID-19 and the response to it has put a
strain on state budgets. Fortunately, Oklahoma will be able to weather the storm
a little better, thanks to policymakers’ actions in 2019.

In a year that saw record-breaking state revenue, Gov. Kevin Stitt, a Republican, insisted upon placing nearly a third of that surplus revenue into savings. These savings will allow Oklahoma to take a measured approach to budget cuts without resorting to tax increases or federal bailouts to prop up unsustainable spending.

Oklahoma policymakers haven’t taken a position on further federal aid to the state, but do believe that greater flexibility is needed from current funds provided to states in the CARES Act.—Curtis Shelton, policy research fellow, Oklahoma Council of Public Affairs

The Rhode Island General Assembly has not committed to reconvening. All public comments, however, make it clear that Rhode Island’s political leaders are “hoping and praying” for federal bailouts, so that they won’t have to cut or re-prioritize any spending.

Rhode Island desperately needs to repeal the 2006 tax cuts for the rich, raising the top marginal income tax rate back to 9.9%. … Furloughs, layoffs, hiring freezes, or even keeping the hiring surge small would be incredibly reckless. Rhode Island is facing an enormous jobs crisis, and to stabilize our jobs market, a surge of state hiring is desperately needed.

Tennessee has shown both fiscal and regulatory restraint in
combating the pandemic. The state Legislature passed a bare-bones budget before
temporarily recessing in March, cutting $1.2 billion from the state’s original
proposed budget.

Gov. Bill Lee, a Republican, has suspended more than three dozen health care, economic, and licensing regulations, several recommended by Beacon Center. Since then, Tennessee has become one of the first states to begin safely reopening.

The state would benefit from increased flexibility in how the
existing $150 billion in federal pandemic funds for state and local governments
can be used, such as providing tax relief or filling pandemic-related
revenue gaps rather than incurring new spending.

However, given that Tennessee is well managed fiscally, any future bailout—of, say, pension systems—would be harmful.

We have the third best-funded pension system in America, so a bailout would involve our taxpayers forking over hard-earned money to more reckless states, in essence punishing us for other states’ poor decisions. Beacon Center’s policy recommendations and reopening guidance may be read here.—Justin Owen, president and CEO, Beacon Center of Tennessee

National: The Foundation for Government Accountability

Medicaid is the Pac-Man
of state budgets. The program now eats up 1 out of every 3 state tax dollars
spent. A provision in the Families First Act gives increased Medicaid funds to
states but
requires them to keep everyone on Medicaid, even ineligible individuals.

Congress can relieve some of the budget pressure on states, and resulting calls for further bailouts, by taking these handcuffs off states and letting them deal with their budgets.—Sam Adolphsen, policy director, The Foundation for Government Accountability, Naples, Florida

UN-HAPPY THANKSGIVING! Why Do Journos Hate This Holiday So Much?
Ted Cruz torches Alyssa Milano after she tries to blame Republicans for standoff on coronavirus relief
‘Big Sky’ Mourns ‘All The Hatred Out There’ For Trans People
San Jose Mayor Says ‘Cancel Big Gatherings,’ Then Attends Party
Black Lives Matter attack Joe Biden and Eric Garcetti