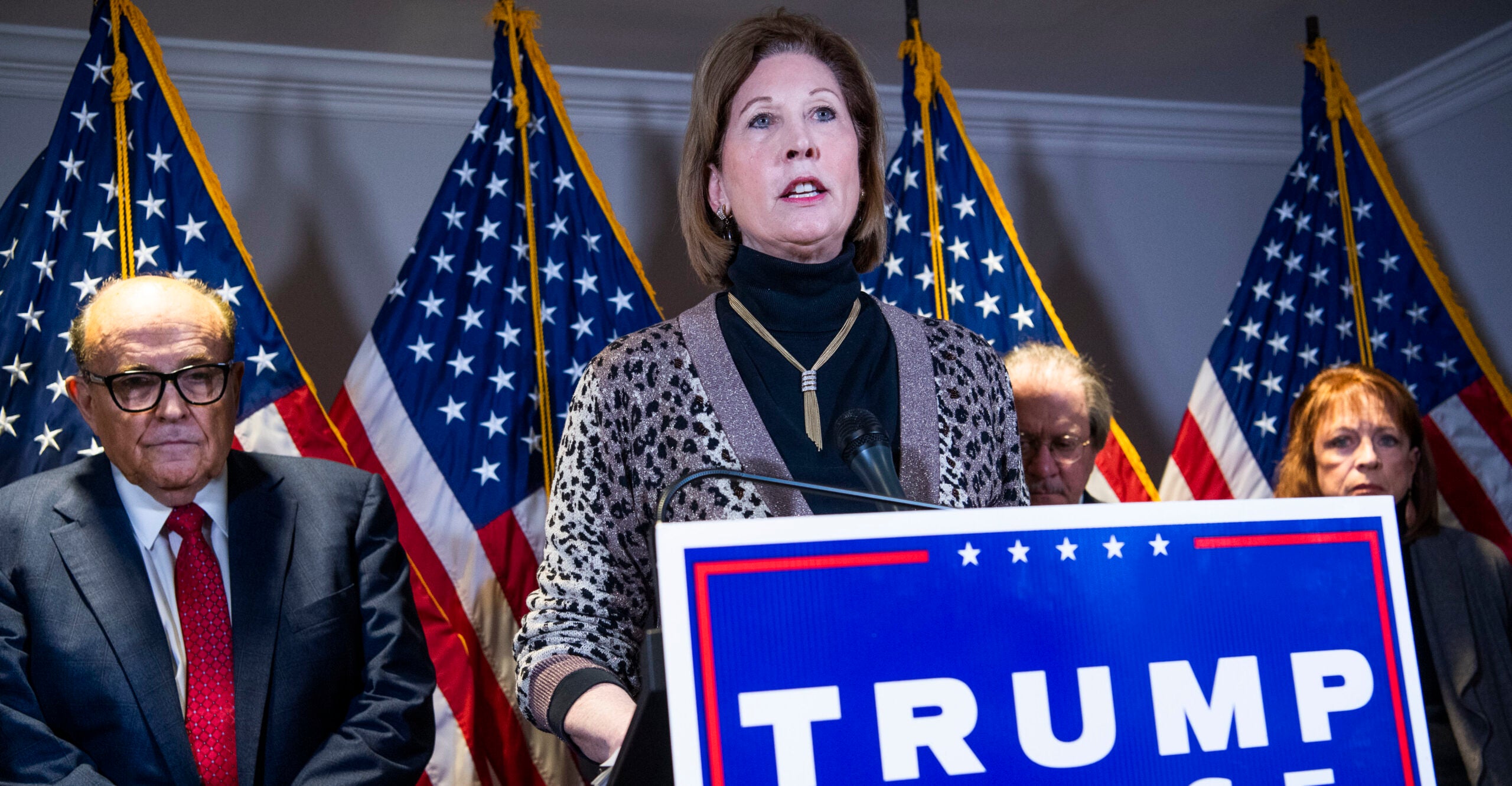 The press conference, led by former New York Mayor Rudy Giuliani and held at Republican National Committee headquarters in Washington, went well over 90 minutes and proved to be as fiery as it was lengthy.

“President Trump won by a landslide. We are going to prove it,” Trump campaign lawyer Sidney Powell, a former federal prosecutor, said at one point.

Time is critical, as states have until Dec. 8 to certify their vote in the presidential race. The Electoral College will meet Dec. 14 to elect a president.

Here are key highlights from the lawyers’ press conference.

The most significant claim made by Giuliani was that affidavits obtained by the president’s legal team will provide enough evidence to overturn the election. Major media outlets called the election for Biden on Nov. 7, saying he was projected to win more than the necessary 270 votes in the Electoral College.

The former mayor said the fraud was clear in Democrat-run cities in Arizona, Georgia, Michigan, Nevada, Pennsylvania,  and Wisconsin.

“We have more than double the number of votes needed to overturn the election in terms of provable illegal ballots,” Giuliani said of cities in the six states. “All you got to do to find out if I’m misleading you at all is to look at the lawsuits. Look what’s alleged. Look at the affidavits. Maybe we can supply more affidavits. In order to do it, I have to get permission from the people.”

Giuliani said most of those who agreed to sign affidavits feared threats and other harassment if their names became public through the media.

Trump’s legal team said it has 220 sworn affidavits from residents across multiple states; the ones made public are from residents of Pennsylvania and Michigan.

However, all the affidavits would be part of the court record.

According to one affidavit, a supervisor told Michigan election workers not to request photo identification from voters, which is required by state law.

Another affidavit claims that election workers in Pennsylvania were instructed to assign ballots without names to random people. This resulted in thousands of Pittsburgh residents showing up to vote only to be told that they already were marked as having voted, the lawyers said.

One election supervisor in Michigan told workers—according to a third affidavit—to alter the dates on mail-in ballots to make it appear the ballots had arrived earlier.

Giuliani said that as many as 100,000 absentee ballots should have been disqualified in Wisconsin, a number that easily would give the state to Trump.

Trump also should have carried Pennsylvania by 300,000 votes, he said.

Powell described the problems with Dominion Voting Systems, a manufacturer of voting machines, and what she said were the company’s ties to the socialist government of Venezuela.

“This is stunning, heartbreaking, infuriating, and the most unpatriotic act I can even imagine for people in this country to have participated in in any way, shape, or form,” Powell said of the alleged widescale fraud, adding:

Powell alleged the massive influence of money from Venezuela, Cuba, and likely China to interfere in the U.S. election. She added that “no one should want a coronation of a president” under these suspect circumstances.

“There should never be another election in this country—I don’t care if it’s for dogcatcher—using a Dominion machine and Smartmatic software,” Powell said.

Dominion Voting Systems entered a 2009 contract with Smartmatic, which builds and implements electronic voting systems, and provided it with optical scanners used in the 2010 election in the Philippines, Accesswire reported.

Lawsuits in the Philippines ensued over glitches and allegations of fraud. An independent review of  source codes used in the machines found numerous problems, saying: “The software inventory provided by Smartmatic is inadequate, … which brings into question the software credibility.”

In a response to a request for comment from The Daily Signal, Dominion referred to information from a press release it issued earlier this week.

“There have been no ‘raids’ of Dominion servers by the U.S. military or otherwise, and Dominion does not have servers in Germany,” the release says, adding later:

Dominion and Smartmatic do not collaborate in any way and have no affiliate relationships or financial ties. Dominion does not use Smartmatic software. The only associations the companies have ever had were:

—In 2009, Smartmatic licensed Dominion machines for use in the Philippines. The contract ended in a lawsuit.

Giuliani noted that the danger of mail-in voting has been cited by such liberal sources as former President Jimmy Carter, a Democrat; former Supreme Court Justice David Souter; and The New York Times.

“This is the first time we did it en masse, and I think we’ve proven that all three are prophets,” Giuliani said of voting by mail. “It’s not only susceptible to fraud, it is easily susceptible to fraud, particularly if you had a plan or scheme that sounds eerily similar to what Joe Biden told us a few days before the election, that he had the best voter fraud team in the world.”

In late October, Biden said: “We have put together I think the most extensive and inclusive voter fraud organization in the history of American politics.”

Biden defenders contend that the Democratic presidential nominee was talking about a voter protection program in his campaign, and that he misspoke.

Giluliani joked that it was a “Freudian slip,” and speculated that Biden was likely part of the fraud. He later backed away, saying he wasn’t sure what Biden is or isn’t aware of.

The former mayor suggested Biden’s assertion about the “most extensive” such operation in American history could have been an overstatement.

“Well, they were good,” Giuliani said. “I don’t know that they were that good, because they made significant mistakes like all crooks do, and we caught them.”

Jenna Ellis, the Trump campaign’s senior legal adviser, noted that based on the alleged conduct by election officials in cities such as Detroit and Philadelphia, “voter fraud” might not be the best term.

“When we talk about voter fraud, it’s actually election official fraud,” Ellis said. “That cannot stand. The Constitution requires that the state legislatures are the ones that make election law. What has happened in this case is that state- and local-level officials and all the way up have changed the rules. They want to tear down the American system.”

Ellis referred to Federalist 68, the founding document in which Alexander Hamilton explained the need for the Electoral College to prevent election of a president through corrupt means;

Our founders were so brilliant that they anticipated this, that there would be corruption, there would be foreign influence, there would be attempts to manipulate the outcome of the election—especially with who they called our chief magistrate. … We select our president through the Electoral College not because it disenfranchises voters, but because it is a security mechanism for the exact type of corruption that we are uncovering.

A reporter asked:  “Is the country on the verge of an electoral breakdown?”

Powell responded: “We’ve already had it.”

She provided some assurance that it’s not over, though.

“We have already had that electoral breakdown. But the Constitution, as Jenna explains, has provisions in it for how you fix this,” Powell said, referring to Ellis’ comment about the Electoral College.

In describing how Republican election observers in some cities were kept at too far a distance to watch the ballot counting, Giuliani referred to the 1992 film comedy “My Cousin Vinny”  starring Joe Pesci as a hapless New York lawyer.

“Did you all watch ‘My Cousin Vinny?’ You know the movie? It’s one of my favorite law movies, because [Vinny] comes from Brooklyn,” Giuliani said.

“When the nice lady says [what] she saw and he says to her, ‘How many fingers do I got up?’ She says, ‘Three.’ Well, she was too far away to see it was only two.”

Giuliani used the movie scene to capture the situation for election observers, who have the legal right to watch the counting process for mail-in ballots.

“These people were further away than ‘My Cousin Vinny’ was away from the witness. They couldn’t see a thing,” Giuliani said, adding:

Now, I don’t know, are you going to tell me that 60 people are lying? They didn’t just tell me this. They swore under penalty of perjury, which is something no Democrat has ever done.

These people are under penalty of perjury. Their names are on an affidavit.

Allowing election observers from both parties has been a long-standing rule, Giuliani noted.

“Why would you not allow people to carry out the function they’ve been allowed to do for 50 years, 60 years? Why wouldn’t you allow inspections of those ballots?” he said. “Because you knew you were going to use those ballots to catch Biden up and you had a big road ahead of you. You had to catch him up to 700,000 to 800,000 votes that he was behind. The only way you were going to do it were with the mail-in ballots.”

Beyond the issues raised by the Trump campaign’s legal team, many references on social media to Giuliani were about not only his movie reference but what appeared to be dark hair dye that ran down his face in two streams as he perspired during the press conference.

Ellis aggressively went after reporters covering the press conference, accusing them of biased coverage and not understanding how legal proceedings work. More evidence will come forward in court, she said, and the team’s presentation was only like an “opening statement.”

“We go through a jury process. This is the court of public opinion right now,” Ellis said, adding:

We are not trying our case in the court of public opinion because if we were, we would get unbiased jurors. I would strike 99% of you from the jury, and I would be allowed to because of the fake news coverage you provide. You are not unbiased jurors.

She predicted that coverage of the press conference by the mainstream media would be dismissive, but said that reporters’ opinions don’t matter:

The facts matter. The truth matters. If you are fair reporters, you will cover that fairly and appropriately and will allow coverage of our media team and our legal team. I can see you taking pictures and can anticipate what your headlines are going to be. If you are not willing to talk about the evidence that is being presented, then that is absolutely unacceptable for journalistic standards.

Legislatures can’t replace electors — even if Trump cuts a deal for it
Michigan Certification of Joe Biden Win Is a Step Toward the End – But It’s Not the End
COVID Vaccines: Bernie’s ‘Crooks’ to the Rescue
About That ‘Broken Algorithm’ | National Review
5 Key Takeaways From Justice Samuel Alito’s Speech