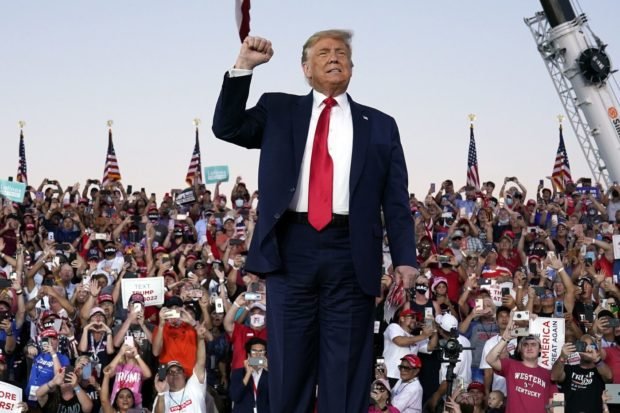 President Trump held a rally in North Carolina on Thursday before 15,000 people. He couldn’t get over the size of the crowd for a week day afternoon.

The first thing Trump did was to tear into Biden’s son receiving 10 million a year from a Chinese businessman just for introductions in addition to the three million a year he got from the Russian Mayor’s wife and the $180,00 a month he got for sitting on the board of the Ukrainian energy company Burisma which he knew nothing about.,
“Biden and his family are corrupt and they got caught. If Biden wins, China wins and China will own us,” Trump told the crowd. Trump went on to say that Biden plans to raise your taxes by 4 times and you will see a depression that is so bad it will make your head spin.” Trump said Biden’s plan will crush America his plan will crush the virus.

Trump told the crowd that with the virus we have people working around the clock for a cure and we now have a reduced fatality rate of 85% and will have100 million doses of the vaccine by the end of the year and the virus will be eradicated.

The New York Post reported Wednesday that a laptop computer abandoned at a Delaware repair shop contains emails between Hunter Biden and various foreign actors offering him money to have access to his VP daddy Joe.

The recovered hard drive also contained photos of Hunter Biden with a crack pipe in his mouth and a “raunchy” 12-minute video of Hunter partying with prostitutes.

Giuliani released a private text message sent from Hunter Biden to his daughter Naomi Biden revealing the Biden crime family’s distribution scheme. Hunter Biden was paying for everything in the family because he was getting the money. They were keeping it from Joe so he wouldn’t have to report it and stay clean.

It sounds like Joe Biden takes half of what Hunter Biden gets paid from Ukraine, China, Russia, Romania, and other countries. No wonder Jill keeps Joe propped up for the campaign, she sees how much she can make.

At his rally Trump said Biden is so corrupt he shouldn’t be running for President, but the media keeps protecting him. Biden should drop out now, but Dems have no ethics, other than bad ones.

The post said that “Joe Biden is a liar who has been ripping off our country for years,” echoing statements that President Donald Trump has made about his Democratic presidential rival. It had cited a claim from a New York Post article about Hunter Biden’s emails, which Biden’s campaign has denied.

“This is chilling censorship of a sitting President’s re-election campaign 19 days from an election, plain and simple,” Andrew Clark, Trump campaign Rapid Response Director, noted in another statement. “Twitter is interfering in the election and trying to stop the public from learning damning information about the Biden family’s corruption at all cost, but our campaign and our supporters will not be silenced.”

President Trump suggested that Twitter should face legal action over the incident.

“So terrible that Facebook and Twitter took down the story of ‘Smoking Gun’ emails related to Sleepy Joe Biden and his son, Hunter, in the @NYPost. It is only the beginning for them. There is nothing worse than a corrupt politician. REPEAL SECTION 230!!!” the president wrote on Twitter late Wednesday.

President Trump suggested that Twitter should face legal action over the incident.

The incident, and others like it, prompted Republicans on the Senate Judiciary Committee to announce they would be voting to issue a subpoena to Twitter CEO Jack Dorsey for a hearing set for next Friday.

We are no longer living in America the land of the free with a media that censors anything conservative and now social media is doing the same thing. They closed out the NY Post article about Hunter Biden and now Trump’s account on Twitter. Facebook has also been censoring conservatives.

ON Thursday night Trump appeared in a town hall meeting hosted by Savannah Guthrie. it was another pitiful excuse for an abusively biased liberal attack on Trump. Savannah Guthrie was the worst interviewer I’ve ever seen. She was worse than Chris Wallace the way she kept interrupting Trump and cutting him off mid-sentence. She was rude, antagonistic, obnoxious, argumentative  and nasty and got her facts wrong. She was using dem talking points you could tell. .

At one point she asked trump about the Q following and saying they supported pedophilia. Trump said they didn’t and they speak out against pedophilia. She then started arguing with him claiming he knew more about them than he was letting on. Trump said he doesn’t know that much about them only what he’s heard.  She kept on insisting that he does know. She sounded like a little immature school girl arguing in the schoolyard and stamping her feet.  She was not the least bit professional and didn’t attempt to hide her dislike for Trump. Trump kept his cool which I was proud of but I expected fist to fly in a normal argument. I think she was trying to get him to raise his voice and show a temper but he didn’t. She was the one who displayed a nasty arrogance and temperament.

Guthrie even brought up the tired old argument about Trump’s taxes and if he disavowed white supremacy. If she did her research as a good reporter should she would see that Trump has disavowed white supremacy over twenty times already over the last four years and has said so before that.  Trump was calm and cool to those questions too. He must have been taking lessons from his VP Mike Pence.

All the people questioning Trump were Biden supporters except for three of them and that one was a republican leaning towards Biden who seemed very nice and said she liked Trump’s smile. The questioners they asked were biased too and I couldn’t help but think those questions were written for them beforehand.

These shows are supposed to be aimed at undecided voters. If you are undecided this late in the game then you better not vote.