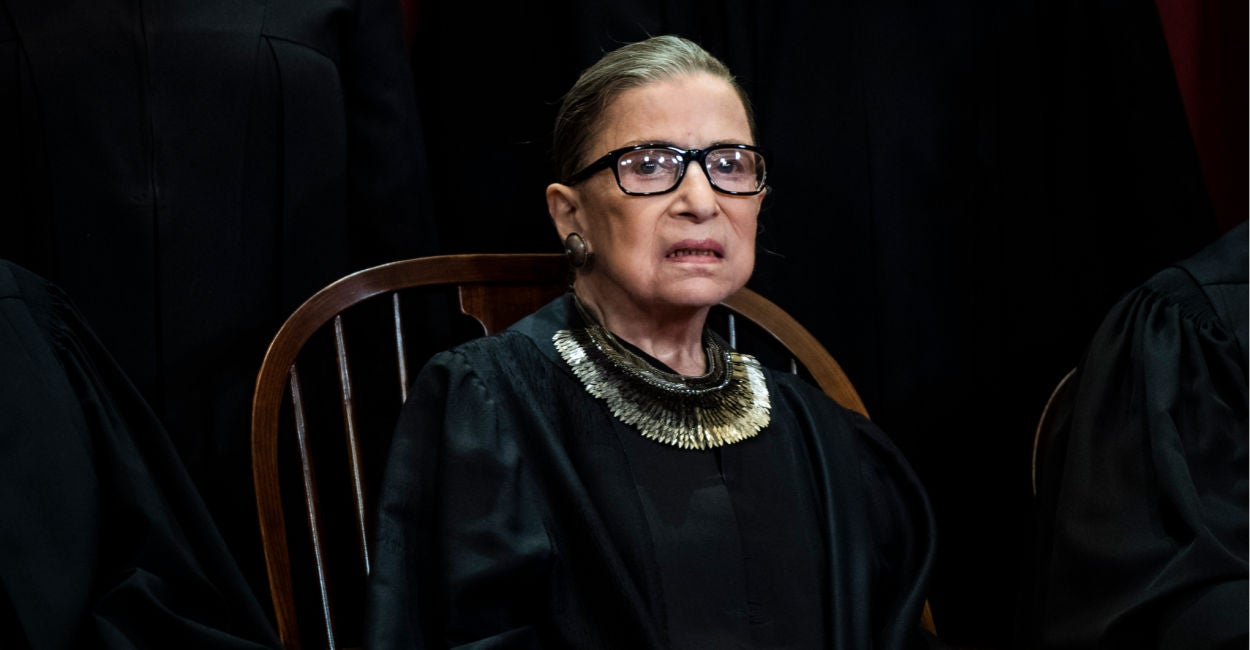 Justice Ruth Bader Ginsburg, who served for 27 years on the U.S. Supreme Court, has passed away.

When her longtime friend and fellow opera fan, Justice Antonin Scalia, died in 2016, Ginsburg lamented that the high court would be a “paler place” without her ideological opponent and debate partner.

The court will be an even paler place without Ginsburg too. She died Friday after a long struggle with cancer. She was 87.

In recent years, the “Notorious RBG” became a pop-culture icon. Known for her signature jabots and fishnet gloves, America’s favorite octogenarian has inspired T-shirts, Halloween costumes, pillows, and much more. There’s an Oscar-nominated documentary and a major studio motion picture about the justice’s early legal career.

“Saturday Night Live” introduced a Ginsburg character with the catchphrase “Ya just got Ginsburned!” and the animated TV show “Futurama” has a character, “Ruth Bader Ginsburg’s Head,” that says things like “You Ruth Bader believe it!”

In short, the public became invested in Ginsburg in a way that’s unmatched for Supreme Court justices.

After the news broke that she had been hospitalized for broken ribs in November 2018, supporters took to Twitter offering to donate their ribs or launch a GoFundMe fundraising site to purchase a giant bubble to keep the fragile justice safe.

Long before she became a cultural icon, though, Ginsburg was a formidable force, a feminist trailblazer who inspired women across the ideological spectrum, and a towering individual–despite her diminutive stature–who commanded respect and admiration from all who knew her.

On opening night at the opera, the crowd would rise to their feet in raucous applause when she entered the room, and singers were giddy at the prospect of getting their photograph taken with her following the performance.

Ginsburg’s jurisprudence also left a lot to be desired for conservatives. During a joint interview, Scalia once quipped about his dear friend, “What’s not to like–except her views on the law[?]”

Indeed, the bulk of Ginsburg’s work demonstrated a belief in a Supreme Court with seemingly limitless powers over society; a living, evolving Constitution that changes with the times; and laws that “enlarge or contract their scope as other changes … in the world, require

As we prepare for what may be the most contentious showdown over a Supreme Court vacancy in history, it is right that we take a moment to review the legacy of a giant in the legal profession: Justice Ruth Bader Ginsburg.

To paraphrase William Shakespeare, we shall not look upon her like again.

She was born Joan Ruth Bader in Brooklyn, New York, on March 15, 1933. Her mother worked in a garment factory and her father in the fur trade. Her mother was a strong figure in her life—placing a premium on education and teaching the future justice the importance of controlling her emotions and being independent.

After her mother passed away from cancer while Ruth was in high school, she went on to Cornell University, finishing first in her class. It is also where she met her future husband, Marty Ginsburg. They married and started a family before she joined him at Harvard Law School in 1956.

Ginsburg was one of nine female students in a class of 500. The dean of the law school allegedly asked these women to “justify taking a place … that otherwise would have gone to a man.” Ginsburg is said to have replied, “I’m at Harvard to learn about [my husband’s] work. So that I might be a more patient and understanding wife.” This self-deprecating remark notwithstanding, Ginsburg excelled as a student, becoming the first female member of the prestigious Harvard Law Review.

While at Harvard, Marty was diagnosed with testicular cancer, and she attended his classes and helped him complete school, while raising their daughter Jane and continuing her own studies. Upon Marty’s graduation, the family moved to New York City, and Ginsburg transferred to Columbia Law School to complete her degree, finishing in a tie for first place in her class.

Despite her outstanding academic record, and much like her contemporary Sandra Day O’Connor, Ginsburg struggled to find employment upon graduation in 1959. She eventually landed a clerkship with Judge Edmund Palmieri, a judge on the U.S. District Court for the Southern District of New York, and went on to teach at the Rutgers and Columbia law schools. At the time, she was one of the few tenure-track female law professors in the country, and she eventually became the first female tenured professor at Columbia Law School, where her daughter Jane Ginsburg teaches today.

In 1972, Ginsburg started the American Civil Liberties Union’s Women’s Rights Project, where she devised a successful litigation strategy for advancing women’s rights in the law that both President Bill Clinton and Justice Scalia aptly compared to the storied legacy of Thurgood Marshall in advancing the cause of African Americans. She argued six sex discrimination cases before the Supreme Court, winning five, including the landmark Reed v. Reed (1971) in which the Court held that the Fourteenth Amendment’s Equal Protection Clause prohibits discrimination on the basis of sex.

In order to advance women’s equality, her strategy was to attack laws that discriminated against men. For example, in Frontiero v. Richardson (1973), Ginsburg successfully challenged a statute that provided benefits to the wives of service members on behalf of a married female Air Force officer. During the Supreme Court argument she declared, quoting abolitionist and suffragette Sarah Grimké, “I ask no favor for my sex. … All I ask of our brethren is that they take their feet off our necks.”

In reminiscing about her role in this movement during a 1988 commencement speech, Ginsburg was characteristically modest, stating that, “the litigation of the 1970s helped unsettle previously accepted conceptions of men’s and women’s separate spheres, and thereby added impetus to efforts ongoing in the political arena to advance women’s opportunities and stature. An appeal to courts at that time could not have been expected to do much more.”

Her career took a different turn in April 1980 when President Jimmy Carter nominated Ginsburg to the powerful U.S. Court of Appeals for the D.C. Circuit, where she served for 13 years. Following Justice Byron White’s retirement in the summer of 1993, President Bill Clinton nominated Ginsburg to the U.S. Supreme Court. The Senate confirmed her by a vote of 96-3, and Ginsburg became the second woman to serve on our nation’s highest court.

Once there, she quickly became known for her work ethic and commitment to the job. While it’s common today for a new justice to be assigned a relatively straightforward case for his or her first majority opinion, Ginsburg’s first opinion, John Hancock Mutual Life Insurance Co. v. Harris Trust & Savings Bank (1993), involved a particularly thorny issue of statutory interpretation that drew dissenting votes from Justices Clarence Thomas, O’Connor, and Anthony Kennedy. By comparison, Justices Neil Gorsuch and Brett Kavanaugh both wrote short unanimous opinions for their maiden Supreme Court majority opinions.

In subsequent terms, Ginsburg often was the first out of the gate to author a majority opinion, sometimes referring to herself as “Rapid Ruth” for the speed with which she could crank out opinions. Ginsburg dedicated herself wholeheartedly to the job. Until 2019, she never missed an oral argument—a remarkable testament to her commitment to the job given that she previously battled cancer in 1999 and 2009, lost her beloved husband in 2010, and underwent a heart procedure in 2014. Even when she was hospitalized for a gallbladder infection during the COVID-19 pandemic, she still participated in oral arguments, asking questions from her hospital bed.

Following the retirement of Justice John Paul Stevens in 2010, Ginsburg enjoyed the most senior position on the court’s “liberal” wing. Throughout President Barack Obama’s administration, she fended off calls for her retirement, pointing first to Justice Louis Brandeis’ service until age 82 and then to Stevens’ service until age 90 as benchmarks.

Ginsburg occasionally courted controversy. She made headlines for publicly commenting on a range of hot-button cases while they were pending in the federal judiciary, chastising her male colleagues for having a “blind spot” on women’s issues, and criticizing then-candidate Donald Trump and joking that she might move to New Zealand if he was elected. She later walked back her statements and, of course, never moved.

On occasion, Ginsburg joined her conservative colleagues in various opinions. She often teamed up with Scalia and Thomas in the area of criminal law. For example, she joined Scalia and Thomas in dissent from the court’s decision not to hear Jones v. United States (2014), involving the Sixth Amendment right to a jury trial, and she joined Scalia’s majority opinion in Kyllo v. United States (2001), finding that police use of a thermal-imaging device constitutes a search under the Fourth Amendment. In Michigan v. Bay Mills Indian Community (2014), Ginsburg joined Thomas, Scalia, and Alito in dissent over the Court’s extension of tribal sovereign immunity to prohibit suits over a tribe’s commercial activities outside its territory. And she wrote for a unanimous court in Cutter v. Wilkinson (2005), upholding a federal law that bars the government from burdening prisoners’ religious exercise against an Establishment Clause challenge.

When Time magazine honored Ginsburg in 2015 by naming her one of the 100 most influential people in the world, Scalia wrote that it was “apparent for all to see” that Ginsburg’s opinions were “always thoroughly considered, always carefully crafted and almost always correct (which is to say we sometimes disagree).”  But, he added, “[w]hat only her colleagues know is that her suggestions improve the opinions the rest of us write, and that she is a source of collegiality and good judgment in all our work.”

Biotechnology: Will Scientists Ever Create a Conscious Human Brain in a Dish?
Can the NYPD make up all of its personnel losses?
China’s Next ‘5-Year Plan’ Likely to Increase Animosity Between Washington and Beijing
Did Kamala Harris Illegally Campaign at a Polling Place?
‘Anonymous’ Claims ‘Nazi-Like’ Trump Wants to Kill Women, Kids at Border