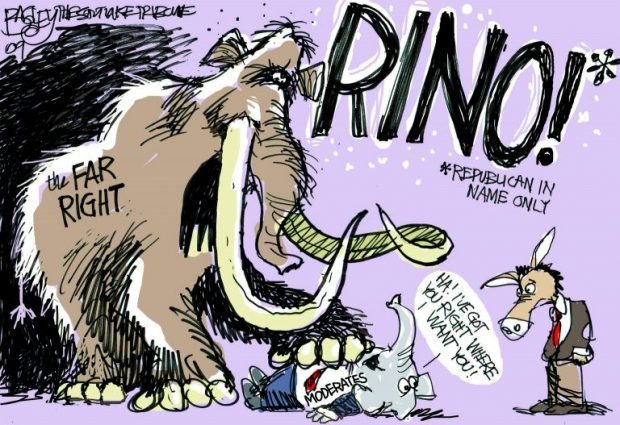 There exists a type of country club conservative that desperately wants to fit in after being elected. The cultural issues most important to the base are cringe inducing for these squishy Republicans. Abortion, immigration, term limits, fighting consonant crusaders and America First might be briefly discussed during the campaign, but are avoided after taking the oath of office.

Slippery, shape–shifting GOP elected officials in state capitals and Washington could be eliminated if state Republican parties insisted candidates sign a pledge to support a legislative agenda after election. State delegates could decide on the top five priorities. Candidates who won’t agree to support those priorities after election aren’t allowed to run as Republicans.

Officeholders who renege on their promise can’t run for re–election as a Republican.

That’s a penalty with teeth. If only we had state GOP leaders with equally sharp teeth.

It’s easy to spot the cocktail conservative. Fitting in for them means signaling lobbyists and the Swamp that they have no intention of rocking the bateau.

Cheney is a political dynasty candidate who would have preferred to hold office as a member of the aristocracy, but was forced to become a Republican if she expected to win. She mouths conservative talking points with the same sincerity as Joe Biden taking Communion.

Cheney never misses an opportunity to signal to elite America that she’s not one of THOSE Republicans.

As the WoePost delicately puts it, “[Cheney] is carving out a lane for herself in a post–Trump world and plotting an ambitious ascent in the leadership ranks.” A “post–Trump world” is a world where Trump voters are once again on the outside looking in as our housebroken conservatives dine with lobbyists and determine our fate.

Her collaboration with the left led to a mini–revolt in the House GOP Caucus.

Rep. Matt Gaetz (R–FL) tweeted, “Liz Cheney has worked behind the scenes (and now in public) against @realDonaldTrump and his agenda. House Republicans deserve better as our Conference Chair. Liz Cheney should step down or be removed.”

A source described as a GOP senior staffer told Breitbart News, “The rank-and-file House Republicans are attempting to get leadership that actually reflects their voters on issues.”

What cemented Cheney’s reputation for me as a craven Swamp toady was her latest internal attack on her own party.

Quisling conservatives signal their distaste for the base by attacking a powerless fringe segment of the party. Cheney chose QAnon.

Immune to perspective, Liz thundered QAnon is “dangerous lunacy that should have no place in American politics.”

QAnon is the bizarre theory that a cabal of Satan–worshiping pedophiles is running a shadow government trying to overthrow Trump. One successful GOP candidate has expressed mild interest. If that candidate wins in November, the percentage of QAnon–influenced GOP incumbents tops out at 0.003 percent.

Had Cheney wanted to demonstrate genuine leadership, there is a dangerous lunacy in American politics that has a great deal of support and presents a tangible threat.

The election and re–election of Barack Obama proves institutional racism is dead. No other 1st–world nation has elected a black man as its leader. The “dangerous lunacy” that labels the USA as a racist state is a destructive lie that fuels violence and hate.

That’s the lunacy Cheney should have attacked. Liz didn’t because that would mean taking Big Tech, Big Education, Big NGOs and all the rest of the left head on. It would have rocked the bateau for sure. It would have been a fight worthy of a member of the House leadership.

The fact Cheney ignored burning cities produced by race hustlers and instead attacked a handful of anonymous Internet fruitloops tells you everything you need to know.

Liz Cheney is just another collaborationist conservative easing into the Swamp.