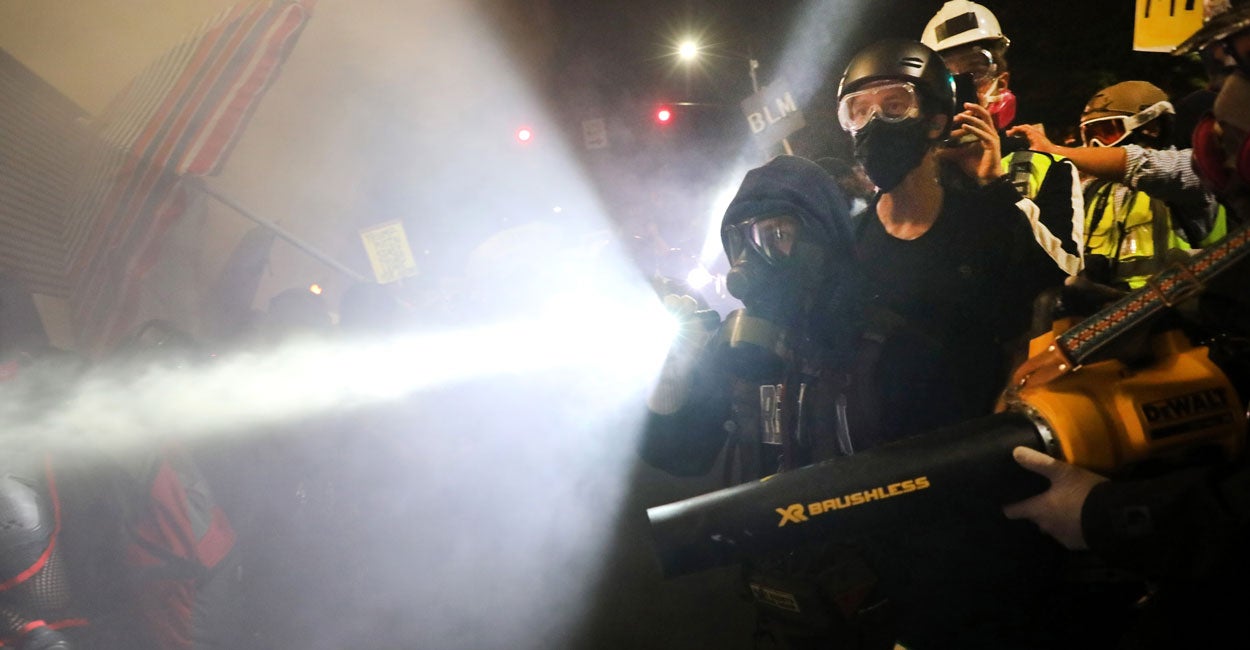 Just a few weeks ago the idea of “peaceful riots” would have seemed absurd, but the American media is nothing if not inventive these days.

Earlier this week, ABC News reported, “Protesters in California set fire to a courthouse, damaged a police station and assaulted officers after a peaceful demonstration intensified.” Legal scholar Eugene Volokh wonders how this terminology would work in the real world: “You are being charged with an intensified peaceful demonstration, in the second degree. How do you plead?”

Indeed, the media’s commitment to tempering their descriptions of violent riots sweeping the nation as “mostly peaceful” is relentless—that particular phrase has become a media cliché practically overnight.

Of course, America’s police officers could also be accurately described as “mostly peaceful,” but any journalist who dared to give cops the same generous benefit of the doubt would likely cause a riot in their own newsroom.

That’s why it was almost shocking to read an Associated Press report earlier this week from reporter Mike Balsamo, who embedded with federal law enforcement protecting the Mark O. Hatfield courthouse in downtown Portland.

“I watched as injured officers were hauled inside. In one case, the commercial firework came over so fast the officer didn’t have time to respond. It burned through his sleeves and he had bloody gashes on both forearms. Another had a concussion from being hit in the head with a mortar,” Balsamo reported. “The lights inside the courthouse have to be turned off for safety and the light from high-powered lasers bounced across the lobby almost all night. The fear is palpable. Three officers were struck in the last few weeks and still haven’t regained their vision.”

Despite the obvious evidence of organized violence, Balsamo’s report is about the only good-faith effort from the national press attempting to inform the public about the current plight of law enforcement. Meanwhile, the media have spent weeks going out of their way to portray rioters as unambiguous freedom fighters.

When protesters in Portland organized a “Wall of Moms” to stand between federal marshals protecting the courthouse and the rioters throwing bricks and shooting fireworks, it prompted gushing media coverage. Columnist Jonathan Alter called the Wall of Moms a “brilliant tactic that may forever change social protest,” apparently unaware that groups such as Hamas have been cynically using human shields for decades.

Following their 15 minutes of fame, you will not be surprised to learn that the group has descended into infighting over the leader’s allegedly insufficient fealty to Black Lives Matter. In spite of media wish-casting, the Wall of Moms was never a morally serious effort.

Naturally, the big beneficiaries of this one-sided media narrative about riots are Democratic Party politicians. On Wednesday, acting Secretary of Homeland Security Chad Wolf announced that the federal government had reached a deal with the city of Portland to downsize the federal law enforcement presence at the courthouse that was clashing with protesters.

However, Wolf’s statement made it clear that the deal was contingent on the city stepping up its own police presence to protect the building, which was all the federal government had asked the city to do months ago.

Rather than admit the deal was a tacit acknowledgement Portland had failed its basic responsibility to maintain law and order, Oregon Gov. Kate Brown pretended it was a victory against jackbooted feds who “acted as an occupying force and brought violence.”

But Brown’s rhetoric is dishonest, as she knows better than most. There were nightly riots for weeks before the feds arrived in downtown Portland. Along with Minneapolis and Seattle, Portland holds the dubious distinction of being a city that has failed to protect its own buildings.

Rioters had already burned the Multnomah County Justice Center jail and the Portland Police Bureau headquarters, just a few blocks away from the federal courthouse.

Speaking as an Oregonian and former resident of Portland, I’ll note that the city’s problems go far beyond the recent riots. Business leaders have been begging city hall to address law and order issues for years.

In 2017, the chief executive officer of Columbia Sportswear, one of Oregon’s most beloved companies, wrote a blistering op-ed about the city’s problems.

“A few days ago, one of our employees had to run into traffic when a stranger outside our office followed her and threatened to kill her,” Tim Boyle wrote. “On other occasions, our employees have arrived at work only to be menaced by individuals camping in the doorway. And our employees have had so many car break-ins downtown that we have started referring to parking in Portland as our ‘laptop donation program.’ Given these experiences, it is a relief when the only thing we are dealing with is the garbage and human waste by our front door. Think about that for a minute. This is outrageous and unacceptable.”

Anyone who has spent time in Portland comes to understand the mutually beneficial relationship between the homeless and itinerant gutter-punks who are the main source of the city’s crime and violence, and the left-wing activists whose radical agenda of decriminalization lets them control the streets.

After police responded to Boyle’s plea to keep excrement out of the doorway of his business, Boyle found himself on the receiving end of organized protests, forcing him to shut down Columbia’s flagship store downtown.

The city has also been capitulating to threats of left-wing political violence for years. Also in 2017, Portland canceled its annual rose parade after “anti-fascists” threatened violence because members of the Multnomah County Republican Party were among the many civic groups slated to march.

It’s one thing to claim that violence is justified against unwanted federal officers invading your city—but threatening local residents with violence because they are Republicans?

Even then, the city rolled over, and in doing so conceded that violent left-wing activists control Portland. That’s not hyperbole—taking control of the city was literally one of the threats made in the anonymous email that caused officials to cancel the parade: “You have seen how much power we have downtown and that the police cannot stop us from shutting down roads so please consider your decision wisely.”

Who exactly is in charge in Portland? Well, it’s not Mayor Ted Wheeler, who’s spent years openly disparaging and undermining his own police force even as he let Antifa direct traffic in his city. You’d think this would endear Wheeler to the radicals he’s trying to appease, but when he recently made a supportive appearance at the courthouse protests downtown the crowd booed and yelled at him to resign.

At this point, it’s insulting to insist that American consumers of news can’t distinguish legitimate protest from violent rioting that has devastated Portland and dozens of other cities.

Similarly, there’s plenty of room for criticism of heavy-handed federal and police tactics, while still understanding that we can’t stand by and let violent mobs burn courthouses. But if covering a story from multiple angles used to be the norm in the media, it’s not anymore.

Ultimately, members of the media have a choice to make—you can be honest about the alarming evidence of law and order breaking down in American cities. Or you can continue to torch your credibility by downplaying the nightly violence for reasons that appear overtly partisan. Please consider your decision wisely.

The post ‘Peaceful Riots’? Journalism Bows to the Woke Mob appeared first on The Daily Signal.