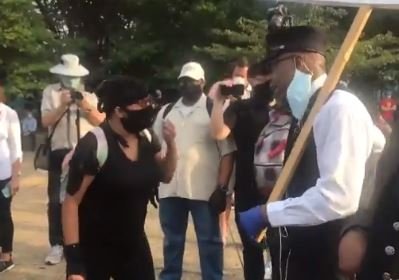 A Black Lives Matter activist screamed at an older Black man Friday for defending the Abraham Lincoln statue activists intended to pull down.

Protesters last week promised to tear down the Emancipation Statue in Washington, D.C, depicting Abraham Lincoln standing over a kneeling slave. Activists across the country have demanded the removal of statues to protest racial inequality and police brutality across the U.S.

The Daily Caller captured a video of a woman shouting at a man to ask why he was “protecting” the Emancipation statue.

“What do you got? he asked her while she screamed,”I can tell you the history!”

“You don’t even know the history,” said the man, who held a DC BLACK TOURS” sign.

The woman responded: “Yes I do, Yes the f**k I do, why are you protecting it? What do you know the history?”

After asking again what she knew about the statue’s history and “who paid for the statue?” the protester continued to shout, “So why are we fighting?! You look just like me!”

“Why are you protecting it?!”

BLM activist gets into a verbal exchange with an older black guy who was speaking up against tearing the statue down.#emancipationstatue pic.twitter.com/4crUOJhDFP

“Give him the freedom of speech!” someone said in the video.

“Y’all don’t know your history”
The older black man gets shouted down for speaking out against tearing down the statue. pic.twitter.com/8i3zEX6Z73

The older man later said, “I say the Black lives matter people are full of shit,” when the Daily Caller News Foundation asked what his message was to BLM protesters.

“And the reason I say they are full of shit is because their money ain’t saying Black Lives Matter. You coming out here, you want to tear down statues, but how much of this Black history of D.C. do you really know?” he said in a video interview.

“I say #BLM people are full of s***”
Says black man at #EmancipationMemorial who is the side of not tearing down the statue in #DC pic.twitter.com/VWPzHXl45d

“If Black lives really matter, you know, how much of this history have you tried to learn about Washington, D.C?” the man said.

Protests against police brutality and racial injustice following the death of George Floyd May 25 have turned violent in many cities across the country. Floyd, a Black man, died in police custody after a white police officer knelt on his neck for nearly 9 minutes, a video of the incident shows. The former police officer, Derek Chauvin, faces charges of second-degree murder and manslaughter for Floyd’s death.